When they met most recently, President Obama extracted from his Chinese counterpart, Xi Jinping, a solemn pledge to rein in Chinese surveillance and hacking of U.S. government agencies, companies and individuals. The backsliding seems to have begun almost immediately , with new reports of attacks by Chinese hackers in the United States. This conflict is not only a matter of competing national interests. At its heart are radically opposed conceptions of personal privacy and the legality of government monitoring.

Within China, government monitoring of private communication is not only common, but it is also explicit, institutionalized and generally quite popular. How much so? Just about every time I get an international phone call on my Chinese mobile phone, I’m pinged within seconds by a text message. It’s an automated message from the anti-fraud department of the city of Shenzhen’s Public Security Bureau (PSB), China’s version of the FBI.

This message informs me in polite Chinese that the PSB knows I’m on the phone with someone calling from outside China, and so I should be especially vigilant, because the caller could be part of some scheme to steal my money or otherwise cheat me. The phone number for the anti-fraud hotline is included. International fraud is, as of now, the only criminal activity that China’s government uses the mobile network to warn me about.

I do like knowing the Chinese police are on the job, warning and protecting the innocent. But I find it a little unsettling that they know immediately when I get an international call and are eager to inform me that they are keeping tabs. There’s also the fact that I get these messages every time my 83-year-old father calls from Florida. Does the Chinese security apparatus know something about him that I don’t?

China Mobile is the world’s largest mobile phone company, with more than 800 million customers. To generate that automatic anti-fraud text message, international calls routed across the network in all likelihood pass through a server layer controlled and monitored by the PSB; calls from certain countries get flagged, and the text message is dispatched as the call is taking place. This isn’t cyberspying. This is a deep integration.

It’s not only the PSB. Upon landing on a trip to another country, I usually get an automatic Chinese-language text message from the Chinese Ministry of Foreign Affairs reminding me to behave politely and providing me with emergency contact numbers. It’s a neat bit of coding. China Mobile reports to the foreign ministry, and perhaps other departments as well, when a user’s phone begins seeking a roaming signal outside China. The system then generates the text welcoming the user to that country and populating the message with the number for the nearest Chinese embassy and consulate.

The U.S. National Security Agency has ways, if Edward Snowden’s revelations are to be believed, to detect when a U.S. mobile phone is being used anywhere in the world. But it goes to a lot of trouble to keep a user from knowing that. Not so the Chinese state.

I’ve asked Chinese friends about this, and none expressed the slightest quibble about their government knowing where they travel or when they receive international calls. The government is just trying to be helpful, they explain. There’s no real civil liberties debate about it, not even in the online channels where criticisms of Chinese policy are voiced.

In contrast, the United States has gone through a particularly bitter and protracted national debate over whether and how mobile phone companies, along with email providers, should share information and communications metadata with the NSA. It’s not certain how much U.S. companies actively assisted the NSA in its domestic surveillance. But it’s beyond doubt that none cooperates to the extent China Mobile evidently does with the PSB.

In the past several years, China has introduced some of the world’s toughest laws, regulations and guidelines on data privacy. These tightly circumscribe what data companies can collect and introduce strict penalties for privacy breaches. Xi cites the laws as evidence that China has zero tolerance for hacking.

The quizzical result is: E-commerce giant Alibaba must not share anything about my Taobao account and is legally and financially responsible if my account gets hacked. But state-owned China Mobile (along with its two state-owned rivals, China Unicom and China Telecom) will freely share my private data with government departments at the national, provincial and local levels.

According to China’s latest cybersecurity law, all companies operating in China, foreign and domestic, must share private data with the government to aid in official investigations. No specific mention is made of state-owned enterprises such as China Mobile. So, we don’t know if China Mobile is required, encouraged or expected to share data that isn’t part of any official investigation — such as who is getting international calls or traveling outside the country.

Some U.S. companies, including Apple, have introduced encryption techniques that make it harder for the NSA to access user data and conversations. No such effort is underway in China, nor, as far as I can tell, is anyone seriously suggesting it.

I’m no civil-liberties purist, so I don’t particularly mind getting these text messages from the Chinese government. But it does serve as a vivid reminder that while living in China I’m subject to a set of rules and an official mind-set that are the obverse of those in the United States. Online and mobile communication privacy as we Americans understand it simply does not exist here. 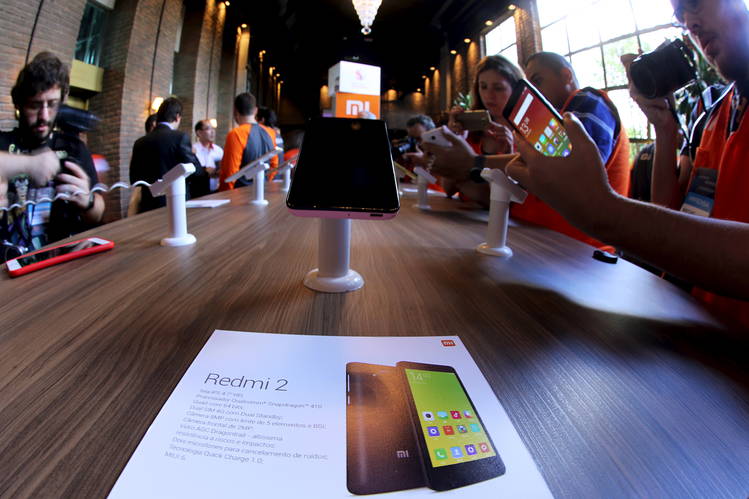 Xiaomi’s Redmi 2 smartphones on display during a launch in Brazil in June, 2015. Photo: Reuters
–

BEIJING—In January 2015, Xiaomi Corp. founder Lei Jun announced to his staff in an open letter that the Chinese smartphone maker was the world’s most valuable technology startup.

“We will journey into the constellations, to places where others haven’t dreamed of,” he wrote.

Living up to those high expectations has been a challenge. Xiaomi missed its 2015 sales target of 80 million smartphones, according to people familiar with the company, and investors are beginning to question its $46 billion valuation, which was based on yet unrealized plans to generate substantial revenue from Internet services.

China’s economic slowdown, coupled with turbulence in the stock market, is prompting investors to take a second look at China’s high startup valuations. Startups such as Xiaomi, which raised vast sums on China’s mobile Internet boom, are now facing growing pressure to live up to expectations.

“With China’s economy slowing, many startups will need to be more cautious in their expansion strategies,” said Nicole Peng, an analyst for market research firm Canalys.

Xiaomi shot to the top of China’s smartphone market in 2014 with the novel idea of selling hardware by gathering a large user base, a business model usually favored by Internet companies, not those selling a physical product. Sales that year tripled to 61 million smartphones, compared with a year earlier. Mr. Lei cultivated fan clubs and used “flash sales” to sell smartphones with iPhone-rivaling hardware at a fraction of the price. He swallowed thin margins, betting he could later sell services to users.

Investors swooned. In December 2014, Xiaomi raised a $1.1 billion round that valued it at $46 billion, topping even ride-sharing startup Uber Technologies Inc. at the time, although Uber has since regained the lead. 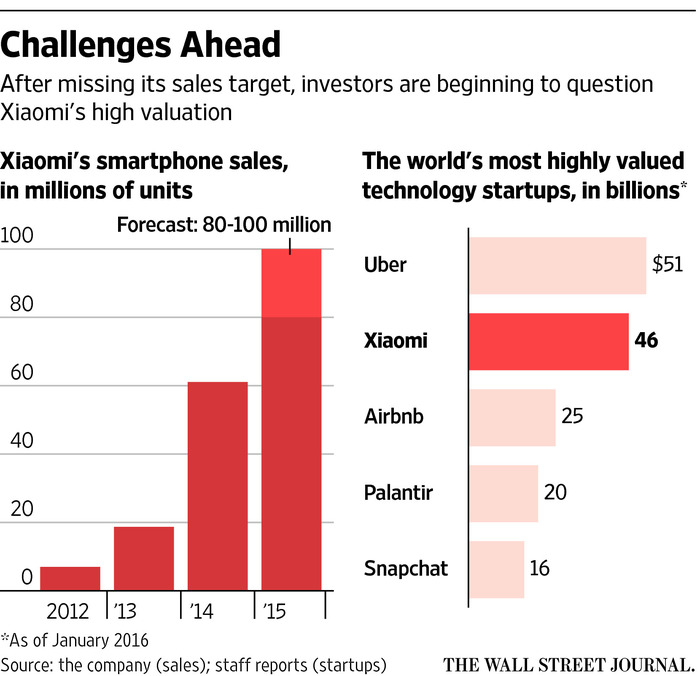 But Xiaomi’s smartphones, which once sold out in minutes in limited batches via online flash sales, are now easily available—a shift that analysts say signals slowing demand.

Xiaomi has lost market share against established competitors with more financial and technological firepower, such as Huawei Technologies Co., which launched a high-end smartphone line and overtook Xiaomi as China’s top handset maker in the third quarter 2015, according to research firm Canalys.

Huawei, which sold more than 100 million mobile devices last year, is beefing up its marketing in overseas markets in a bid to challenge Apple Inc. and Samsung Electronics Co. , the world’s two biggest smartphone makers. Huawei’s engineering strength and brand image built up over decades make it difficult for Xiaomi to compete in China, analysts say.

“The competition in China’s smartphone market has intensified tremendously this year,” said a Xiaomi spokeswoman, who declined to comment on the company’s valuation or say whether it met its 2015 sales target. She said Xiaomi sales were “within expectations” and its flash sales are primarily for new phones when production ramps up.

The lack of its own high-end chip technology also proved to be a competitive disadvantage for Xiaomi in 2015. When early versions of the Qualcomm Inc. ’s Snapdragon 810 processor were reported to overheat, it dampened sales of Xiaomi’s most expensive handset yet, the 2,299 yuan (US$349) Mi Note, analysts said. Xiaomi couldn’t fall back on an in-house developed chip to get around the problem, as Huawei and Samsung did.

Xiaomi and Qualcomm declined to comment on the processor. Analysts say the problems have since been fixed.

Overseas growth has also been slow for Xiaomi, with the percentage of its smartphones sold overseas in the first nine months of 2015 rising to 8%, compared with 7% in the 2014 calendar year, according to Canalys. It faced tough competition overseas, and found consumers unaccustomed to online phone-buying, said Ms. Peng, the analyst from Canalys.

Xiaomi’s thin patent portfolio also became a hurdle as it sought to expand in markets such as India. A lack of patents led to a court ruling that crimped its access to the crucial India market. In December 2014, India’s Delhi High Court ordered Xiaomi to stop selling all smartphones not running on Qualcomm chips due to a patent lawsuit filed by Sweden’s Ericsson. A year later, the injunction remains, which means Xiaomi can’t sell its popular models running chips made by Taiwanese chip maker MediaTek Inc.

The lack of a diversified customer base is another challenge for Xiaomi. It remains “locked in a Chinese demographic ghetto of mainly males 18 to 30,” said Peter Fuhrman, chairman of China-focused boutique investment bank China First Capital. Xiaomi’s focus on low prices has hit its brand image, he said.

Xiaomi’s average smartphone price fell to $122 in the third quarter from $160 a year earlier, despite China’s smartphone sector moving upmarket, according to IDC. The average price of a smartphone in China rose to $240 from $202. Huawei’s rose to $209 from $201. Xiaomi’s best-selling model last year was its cheapest, the $76 Redmi 2A, IDC analyst James Yan said.

Xiaomi’s supporters say the outlook is still bright, as it shifts to building an ecosystem of smart home products. The company has invested in 56 startups so far, ranging from iconic scooter maker Segway to a manufacturer of air purifiers, essential in China’s smog-choked cities.

But others are skeptical.